“Do you think God forgives us for our sins? Not the shit we confess to when guilt overcomes us but the shit that we’re so ashamed of that we’ll never tell another soul?”

“This life we live… I can’t answer that question homie. Sometimes I feel like we soldiers out here just doing what we need to do to live dog. But I just don’t know, it’s only so much shit you can repent for before your seat in hell is already reserved.”

The sky was clear, it wasn’t like it was in the city. We were sitting in my garage, passing a blunt and sipping on some Johnny Walker. Anybody that would have driven by would have thought we were two executives or business men just unwinding after a rough day. We’d just heard that one of our boys got lit up coming out the strip club. I took it as being part of the game, my partner was taking it way harder than that, I could see it in his face.

“About a week ago, me and Harold went to ride on these dudes that owed B some money. We pull on the street, hit the lights, put the masks on and the dudes weren’t older than thirteen or fourteen. I couldn’t do shit but just sit there, Harold got out the car… Walked up and put two in both their heads before they even knew what hit them. I know the rules to the game so I got out and put one a piece in their chest. We get back to the spot, I ask B if he knew were just boys. You know what he said? “They shouldn’t have been playing a grown man’s game.””

He stood up and started pacing, I just sat back and watched the stress and pain take over. People think about thugs and think about animals and fake ass rappers. It ain’t really like that, growing up what the hell else you go do when your mama can’t pay the bills but she’s working two jobs. When your daddy ain’t never been around and ain’t shit to eat but the little to keep us going. You do whatever and you grow up getting used to that money. Next thing you know you twenty nine and lucky to be alive but living with demons and memories you can’t shake.

“Look at us man! LOOK AT US! Wearing slacks and suits, married with kids. Wives with degrees from the suburbs pretending like we not street niggas! You know I go home to Kim, kiss my kids, fuck my wife and then spend the whole night just lying there. Scared to sleep because if the nightmares don’t get me some nigga from outchea might run in my spot looking for me and get my family! Them lil niggas was babies man and we just hit em before they even fucking lived. How you live with some shit like that? I tried to remember last night how many bodies I got on me and I couldn’t. These dudes in the street respect my name and my murder game but I don’t even want to live no more. If it wouldn’t for my kids, I’d eat this fucking nine Jake.”

B tried to tell me he was weak, that the game wasn’t in him no more but I told him if he touched my boy then that meant beef with me. But hearing him talk, hearing the sadness and pain in his voice, the regret for the shit he’d done, the shit we’d done. I knew we couldn’t trust him. When a man starts to talk about killing himself he’s lost his will. That’s how niggas end up snitchin, end up feeling like they need to right their wrongs. I hit the button and the garage door started to let down. I wouldn’t let a stranger do what I needed to do.

“We started young man. We done went to jail together, fucked our first bitches together, robbed our first spot together. You my brother man, you always been my brother. We went from standing in lines for Jordan’s to sitting front row at Rockets games. We could have left this bullshit street shit to the young guns years ago but you know why you still do it? Because it’s who we are, it don’t matter what we tell ourselves it feels good to have that gun in your hand and a niggas life in your hands. I’m not scared to die man, my family good if I go out tomorrow. I can’t live my life like B, sitting in an office pretending that I’m not what I am. I’m a goon! A fucking soldier! And I’m a live and die like one! Fuck a conscience. I love you bro.”

He just smiled and turned his back to me, looking at a picture of us from the Miami a couple years back.

I took the knife out my pocket and clicked it open, before he could react I grabbed his head, snapped his neck back and swiped the blade across his throat. He couldn’t talk, he just looked at me as the life drained from him, I held him in my arms and cried for my friend. Maybe he could find the peace in death that he couldn’t find in life.

Better that he go out a real nigga than a snitch. 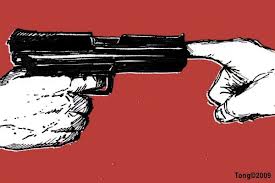